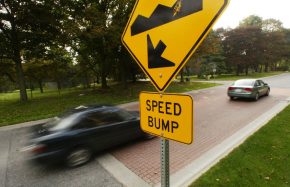 Alex Weaver became so upset by the speeding drivers on the street he lives on in North York, where the speed limit is 40 km/hr that he has been taking matters into his own hands by stepping out into traffic to slow drivers down. However, Alex is in violation of the Highway Traffic Act, he is aware that he’s taking a risk, but continues. Speeding is the number one killer on Ontario roads as deaths continue to rise from 2016. Weavers says that cars doing between 60 and 70 km/hr on his street and is concerned about the deadly consequences. Weaver has been calling Toronto police about his concerns, but says the force hasn’t done enough.  Briefly, a digital sign went up telling motorists their speed and it had some positive results, according to Weaver. But then it was taken down. He’s also starting a petition to ask city hall to add speed bumps to the street. We speak with Alex Weaver about his crusade and Constable Clint Stibbe from Traffic Services. Click here to listen to the podcast