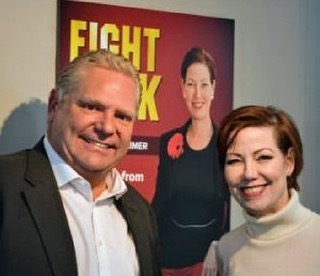 Doug Ford announced this weekend he plans to run for a seat in the Ontario legislature this June even if he loses the leadership race for the province’s Progressive Conservatives. If he wins, the former Toronto City Councillor plans to axe the carbon tax.

All three confirmed candidates say they plan to scrap the tax, estimated to bring in 4 billion dollars in revenue. To make up for the shortfall, Doug Ford says he plans to cut government waste.

When challenged on whether or not this means Ford will have to cut services to make up for any revenue shortfall arising from the change, he says he’ll instead find efficiencies like he did when at Toronto City Hall.

Ford has been publicly critical of the online voting procedures for the party, saying seniors are being shut out of the  process, since many don’t have access to computers. He has personally offered that his team will reach out to older voters to make sure they have access to online voting.