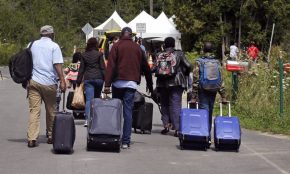 As many as 2300 of the 7,000 people who have crossed illegally into Quebec from the U.S. over the last six weeks are under the age of 18. Quebec’s immigration minister says the provincial education department is looking into holding classes inside Montreal’s temporary shelters housing refugee applicants, in order to help the children feel more secure. The statistics were released at a joint federal-provincial task force meeting in Montreal yesterday, created to help co-ordinate a response to the surge of asylum claimants. Speaking after the meeting, Prime Minister Justin Trudeau said he understands concerns of some Canadians and offered reassurance to Canadians that the country’s immigration and refugee system is up to the challenge. Immigration Lawyer Guidy Mamann weighs in on this issue as does NDP Immigration Critic Jenny Kwan. Click here to listen to the podcast.