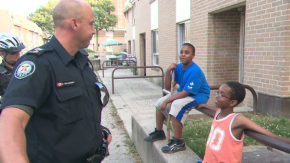 Toronto is perceived to be one of the least safe cities in the country. But, according to a new survey released today to asses the public perception of safety in 15 Canadian cities. The poll findings were that next to Winnipeg, Toronto was considered to be the least safe city in the country. But is this accurate? We spoke with the V.P. of Mainstreet Research, Joseph Angolano and Toronto Police Services Staff Inspector, Chris Boddy about it. Click here to listen to the podcast