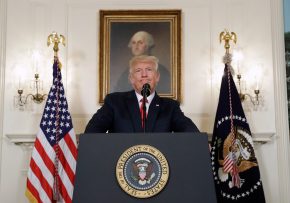 President Trump reiterated what he said on Saturday. Both sides were to blame for the weekend violence in Charlottesville, Virginia and accused what he called the “alt-left” of being very violent against the white supremacists who were demonstrating with a permit. In his latest remarks, Trump also showed sympathy for the fringe group’s efforts to preserve the monument of Confederate General Robert E Lee. In doing so, Trump used the bullhorn of the presidency to give voice to the grievances of white nationalists, and aired some of his own. His remarks amounted to a rejection of the Republicans, business leaders and White House advisers who earlier this week had pushed the president to more forcefully and specifically condemn the KKK members, neo-Nazis and white supremacists who took to the streets of Charlottesville. We go to Washington to chat with the assistant editor of Red Alert Politics, Siraj Hashmi and political strategist Mike Van Soelen from Navigator. Click here to listen to the podcast