The world watched in horror as white supremacists and neo-Nazis descended on Charlottesville, Virginia to stage what they described as their largest rally in decades to “take America back.” They openly chanted racist and Anti-Semitic slogans and one counter protestor Heather Heyers was killed when a car driven by James Alex Fields plowed into that crowd. In his statement President Donald Trump was reluctant to call out the alt-right by name putting the blame on many sides. That was hailed as a victory by the alt right and Trump has come under fire for that, although the White House later condemned the white supremacists, as did Attorney General Jeff Sessions, who said the incident fits the definition of domestic terrorism. There have been many protests around north America since then. So does this represent a re-emergence of this hateful ideology? Or, will the backlash against it signal its demise. Numbers. We speak with Michael Diamond from Upstream Strategy Group and award-winning investigative documentary filmmaker Martin Himmel, who went undercover for his documentary on the New Anti-Antisemitism, which profiled some of the people who were front and centre in Charlottesville.  Listen to the podcast here 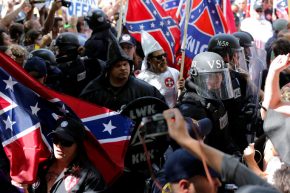