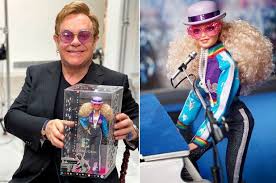 Mattel has released the “Elton John Barbie’.
It comes complete with  silver sequined top, a bomber jacket that says “Elton” on it, flared jeans embossed with the initials “E-J,” sparkly pink glasses and rainbow-striped platform boots.
The 73-year old says he hopes the “Elton Barbie” will inspire people to “fearlessly pursue their dreams and limitless potential.”
One can be yours for about $80 CAD