The federal NDP leader is warning if the new Conservative Leader Erin O’Toole wins the next federal election, there will be devastating cuts to healthcare, even during the pandemic. 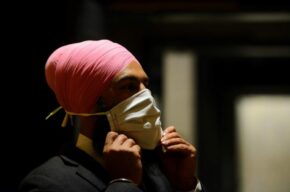 “What we see from Conservatives, it’s a clear pattern where they believe the path forward is to cut the programs that people rely on,” Singh told Fight Back, “And with Erin O’Toole in particular, Prime Minister (Stephen) Harper massively cut healthcare, and we’re in a pandemic and we’re hurting because of those cuts. Around the cabinet table when that decision was made, Erin O’Toole was a minister, so he was there and supported a decision to cut healthcare funding.”

At the same time, Singh told Fight Back his focus is not on whether or not we should have an election, but rather how to get help to people in a pandemic.

MPs return to the House of Commons on September 23rd and will have a confidence vote on the governing Liberals’ throne speech in the days after.