A letter has been sent to parents by the YRDSB Director of Education Louise Sirisko explaining that a staggered entry for elementary and secondary schools is planned to help students learn routines and become familiar with their new learning environments.

The details of the plan have not yet been released, but are expected to be made available soon. 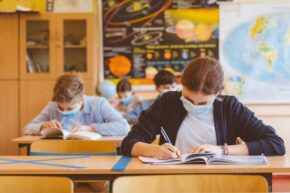 Trustees with the Toronto District School Board plan to make a decision later today on which of three options they will go with for the new school year, all of which involve using reserve funds to bring in more teachers to reduce classroom sizes and increase physical distancing among students.

“We are working as hard as humanly possible night and day to try and get this information locked down and then get it out to parents because we know they not only have an important decision to make, they just want to know what’s going on come this September,” Bird explained. Listen to the full panel discussion on the ever changing coming school year by clicking here.

TDSB trustees also want to make masking mandatory for all students, not just those in grades 4 to 12 which is what’s included in the provincial plan.

Premier Doug Ford says that might be tough to pull off with young children, but he’s not opposed to the idea and ultimately will support the board’s decision.

The premier is also backing his education minister’s decision to allow all school boards in the province to have an additional two weeks, up to September 22nd, to start the school year if necessary.