ART WORLD'S INDIANA JONES IS AT IT AGAIN

The Indiana Jones of the art world is about to strike again. 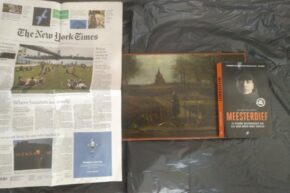 Dutch art detective Arthur Brand says he has received two “proof of life” photos in the hunt for a stolen Van Gogh.

The 1884 artwork “Spring Garden” went missing after a break-in at a museum near Amsterdam in late March. The painting is said to be work more than $6 million.

Brand, says he was given two photos of the missing painting a few days ago, while he’s not saying how the images made their way into his possession, he does says they represent the first proof the painting still exists.  He explains that thieves often destroy valuable pieces of art because of the difficulties involved in reselling them.

Brand says if the painting still exists, he can retrieved it.