"ROSIE THE RIVETER" DIES AT 95

You may not have ever heard her real name, but most Zoomers have heard of her. She was an icon in World War II. 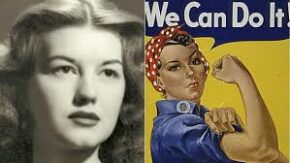 She was born and grew up wealthy, but when the U.S. entered World War II, she went to work on an assembly line driving rivets into the metal bodies of fighter planes.  As a result, she became the model of the hard-working women in overalls with bandanna-wrapped hair who kept the military factories humming.

Later in life she became a major philanthropist

Rosalind Walter died of natural causes yesterday at her home in Manhattan. She was 95.