It may have awakened you when it was issued just after midnight Thursday morning.

An Amber Alert has been issued for a 14 year old boy by the name of Shammah Jolayemi, last seen in the area of Jane and Driftwood north of Finch just before 8:30 Wednesday morning. 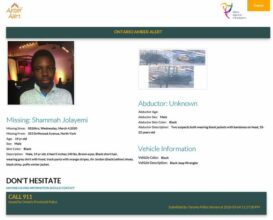 Toronto Police Inspector Jim Gotell says they believe the boy was pushed into a vehicle.

Gotell says Shammah Jolayemi’s parents called police at about 5:30 Wednesday afternoon, not knowing he did not make it to school that morning and are said to be extremely distraught.

They are asking that Shammah’s step brother contact police, not because he’s a suspect, but because he may have information about the suspects.

They are described as 18 to 22 years of age, black, and wearing black jackets with bandanas on their heads.

The child is described as black, just under 6 feet tall, with a slim build and short dark brown hair.

The suspect vehicle is described as a black jeep wrangler with oversize front tires and a front push bar with round fog lights.