SYRIAN OPPOSITION CALLS ON THE WORLD TO AID REBEL-HELD IDLIB

A Syrian opposition leader has called on the international community to help millions of people in the last rebel stronghold in the country. 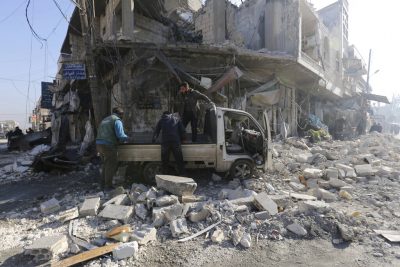 A crushing government offensive is underway there and he called it a “disaster area.”

After weeks of intense bombardment, Syrian government forces launched a ground offensive on southern and eastern parts of Idlib province in the northwest last week.

That has forced tens of thousands of people to flee their homes.

Idlib, which is dominated by al-Qaida-linked militants, is also home to 3 million civilians.

The opposition leader told reporters in Istanbul that there is “a humanitarian catastrophe inside Syria.”