The first day of impeachment hearings into U.S. President Donald Trump has wrapped up on Capitol Hill with two career diplomats testifying. 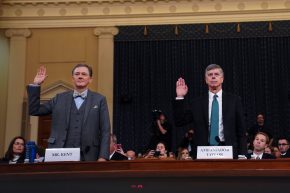 William B. Taylor, the ambassador to Ukraine, said a member of his staff had overheard a phone conversation between the President and Gordan Sondland, the U.S. ambassador to the European Union where the Trump mentioned “the investigations.”

Conversations between the aide and Sondland indicated the President was more interested in investigations into former vice-President Joe Biden and his son Hunter.

The hearings are to try and establish whether Trump tried to withhold military aid money from Ukraine in exchange for the country to launch an investigation into the Bidens’ dealings with Ukrainian companies.

Kent said Trump attorney Rudy Giuliani tried to “gin up politically motivated investigations” in a smear campaign against the then ambassador to Ukraine Marie Yovanovitch.

Trump, when meeting with Turkish President Reccep Erdogan at the White House, said he wasn’t watching the hearings.