TURKEY AGREES TO CEASEFIRE IN SYRIA

A ceasefire deal has been reached between Turkey and Kurdish forces in Syria.

U.S. President Donald Trump is claiming victory all around now that Turkey’s agreed to halt its incursion against Kurdish forces that Turkey considers to be terrorists. 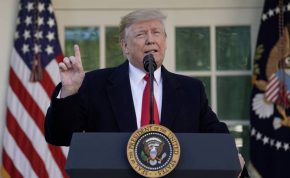 “This is a situation where everybody is happy,” said Trump. “I’m happy because there’s no fighting. We can bring certainly most of our people back home for the first time in many years.”

An initial 120 hour ceasefire will allow Kurdish forces to move away from the border with Syria. This will create a safe zone between the Kurds and the Syrian border with Turkey.

Once that’s done, a permanent ceasefire will be in place.

“We’ve received repeated assurances from them that they’ll be moving out,” said U.S. Vice-President Mike Pence from the American embassy in Turkey’s capital of Ankara.

“They greatly welcome the opportunity for a ceasefire–to make a safe and orderly withdrawal from those areas in the safe zone.”

The U.S. had imposed economic sanctions on Turkey after they launched their offensive on the Kurdish forces.

Those sanctions will be lifted once the permanent ceasefire is in place.