Two coveted Nobel literary awards have been announced Thursday morning in Stockholm, after a year’s hiatus due to sex-abuse allegations that had rocked the secretive Swedish Academy.

The 2018 Nobel Prize in literature has been awarded to Polish novelist Olga Tokarczuk for works the academy says explore the “crossing of boundaries as a form of life.”

Tokarczuk has celebrated the ethnic melting pot that Poland was in the past in her works. That has not made her universally admired by the nationalists in power in Poland.

Even Culture Minister Piotr Glinski said in recent days that he has tried to read her works but never managed to finish any of them.

The last Pole to win the Nobel literature prize was poet Wislawa Szymborska in 1996. 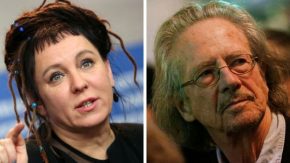 The 2019 prize goes to Austrian writer Peter Handke, whose work is described as exploring “the periphery and the specificity of human experience” with linguistic ingenuity.

Peter Handke is known as a provocative author who hasn’t shied away from courting controversy or, as one of his works is titled, Offending the Audience, in a career spanning more than five decades.

Handke’s debut novel in 1966 was The Hornets. Also that year, Offending the Audience made its debut in a Frankfurt theatre, confronting elegantly dressed theatregoers as “good-for-nothings.”

His 1970 novel The Goalie’s Anxiety at the Penalty Kick, the story of a former sportsman, was filmed by Wim Wenders.

Handke was an opponent of NATO’s airstrikes against Serbia in the Kosovo war of the late 1990s and spoke in 2006 at the funeral of former Serbian leader Slobodan Milosevic.