Canada has blown past expectations by gaining more than 81,000 jobs in August, according to Statistics Canada.

Economists had predicted a gain of 15,000 jobs. The unemployment rate, holds steady at 5.7 percent with more people entering the job market. 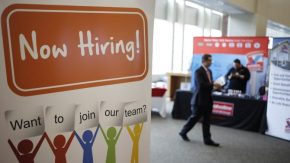 “A bright spot is wages for permanent employees rose 3.8% year over year. About 20,000 jobs were added in the educational services sector, mostly in Quebec. Overall very positive jobs numbers in Canada.”

Unemployment in the U.S. is still at a 50-year low at 3.7% but the less-than-expected job growth has some worried the trade war with China may be starting to affect the U.S. economy and a slowdown is around the corner.