Voters head to the polls beginning at 10am to mark a ballot for mayor, councillor and school board trustee. 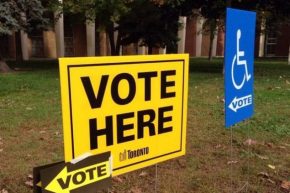 To be eligible to vote in Toronto, you’ll need identification showing your name and Toronto address. You should also bring the voter information card that came in the mail.

But if you don’t have that card, you can also go online to MY VOTE and enter your Toronto address to find the location of your polling station and if you are on the voter list.

And it’s older Canadians who will be most committed to coming out to cast a ballot.

Citizens between 65 and 74 boast a turnout rate much higher than that of younger adults. In the 2011 federal election, more than 75 percent of that age group turned out to vote.

This is why we’re hearing more about seniors issues with each election. As CARP founder and ZoomerMedia President Moses Znaimer explains, there is a powerful shift fueling this change.

“It’s what’s happening when through the miracle of modern and better nutrition and better education, we’re all living longer and most of us our living better, while at the same time, we’re having fewer and fewer kids,” Moses explains.

Of the five key issues in the Toronto mayoral race, seniors are particularly vested on housing, transit and taxes.

Listen for more on the importance of the older vote on Zoomer Radio’s Fight Back with Libby Znaimer Monday after the noon news.

Listen for live municipal election updates on Zoomer Radio with Bob Komsic after the polls close at 8 Monday evening, and again Tuesday morning with Jane Brown on Zoomer Radio News.

Listen for live update municipal election updates on The New Classical FM with Libby Znaimer after the polls close at 8 Monday evening, and again Tuesday morning with Christine Ross on Classical FM News.