MORE THAN 1 IN 3 PEDESTRIANS IS DISTRACTED: STUDY

We’ve all seem them; pedestrians walking while looking at their smartphones, even while crossing the street. 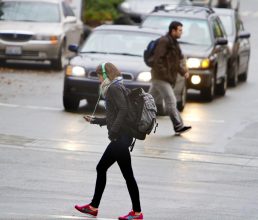 A new survey out of British Columbia reveals that more than a third of pedestrians are distracted by their smartphones, either with texting, reading, talking or listening.

Researchers at the University of British Columbia used automated video analysis to examine the movements and walking behaviour of pedestrians at a busy four-way intersection in Kamloops, B.C.

By watching the actions of nearly 360 pedestrians, they came to the determination that more than 1 in 3 are distracted while walking.

The researchers say the UBC findings are key considerations for the development of safe driverless cars.

Toronto Police Constable Clint Stibbe says when you’re not distracted as a pedestrian, you could possibly save your own life.

“We had a recent situation at Simcoe Street. A pedestrian was attempting to cross the roadway and the car started to make the left hand turn toward the pedestrian, and the pedestrian actually had to jump back to avoid being struck. The driver was totally in the wrong and the driver was charged, but the end result was that pedestrian being aware of their surroundings was able to put themselves into a situation where they were able to get themselves out of a collision,” said Constable Stibbe.

Constable Clint Stibbe will have more to say about the dangerous of distracted walking, when he joins Jane Brown on Zoomer Radio’s Fight Back after Wednesday’s noon news.