The family of the 11 year old Toronto girl who made up a story about a man cutting off her hijab with scissors has expressed their sincere apologies to every Canadian.

In a statement of apology shared with various media outlets, the family says that at the time, they assumed it to be true just like everyone else. 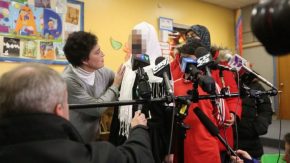 The made up incident last Friday made headlines around the world, as did the police investigation into the allegations which determined early this week that the events did not happen.

The family’s statement says they are deeply sorry for the pain and anger caused in the past several days. They also express gratitute toward Pauline Johnson Junior Public School which they say “reacted with compassion and support”.

Toronto Police Spokesperson Mark Pugash told Zoomer Radio’s Fight Back with Libby Znaimer, in the aftermath of this case, discussions will take place between members of the Toronto District School Board and Toronto Police about how events were handled.

“We have a good relationship with the TDSB. We speak regularly on a whole variety of issues and when there’s something as big as this, we’ll always discuss it and look at the way it was handled and determine if there are any lessons to be learned, Pugash explained.

Here is the family’s statement in its entirety:

“We are deeply sorry for the pain and anger that our family has caused in the past several days.

When our young daughter told the school that she was attacked by a stranger, the school reacted with compassion and support — as did the police.

When we arrived at the school on Friday, we were informed what happened and assumed it to be true, just like everyone else. We only went public because we were horrified that there was such a perpetrator who may try to harm someone else.

This has been a very painful experience for our family. We want to thank everyone who has shown us support at this difficult time. Again, we are deeply sorry for this and want to express our sincere apologies to every Canadian.

We look forward to closing this difficult chapter and providing support to our children.”