Pride Toronto appears to have taken a major financial hit over the controversial decision to ban police officers from marching in the June 25th parade. 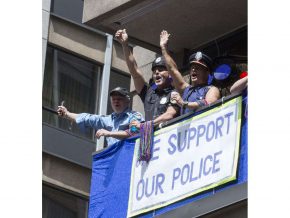 The organization’s 2017 audited financial statements are on the agenda of today’s Annual General Meeting, and show Pride Toronto lost $1.3 million and was forced to use up all of its nearly $850,000 surplus to bring the deficit down to nearly $460,000.

A review of Pride’s financial statements for the past seven years shows that the only time the organization came even close to running such a deficit was in 2010, during another controversy over allowing a group calling itself Queers Against Israeli Apartheid to participate in the parade. That year they lost more than $430,000 and used their surplus to bring the deficit down to just under $110,000.

At the end of May, efforts led by Toronto City Councillor John Campbell to withhold the city’s $260,000 grant this year until Pride allowed police to march, lost in a 27-17 vote after a day-long council debate.

Toronto Police Association President Mike McCormack says he’s not surprised the the financials this year are way down because he says police had an overwhelming amount of public support in the wake of the ban.