There has been no apology so far from Ontario’s Ministry of Education for a glaring error that has been taught in grade 6 classes at 800 Ontario schools for three years. 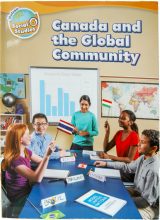 In a Zoomer Radio News exclusive, B’Nai Brith received a complaint a month ago about a passage in a social studies textbook that falsely accuses Israel of forcing child soldiers into combat.

Once the story had gone to air on Monday, the ministry emailed a statement to Zoomer Radio News saying the situation is being monitored closely to ensure that the students have the corrected version of the text for the next school year.

The textbook had been fact-checked numerous times, including by the Ministry of Education.

Daniel Koren of B’Nai Brith told zoomer Radio’s Fight Back with Libby Znaimer, it’s difficult to believe the book was given the go ahead for publication in the first place.

“As it is the ministry that approved this at the highest level, we believe that A. they should apologize for having allowed something like this to go through its vetting process…but also that they should ensure that the textbooks are corrected,” Koren explained.

As for the publisher, Nelson Education, it has apologized and promised to re-print corrected versions. For current books in circulation, the publisher will mail stickers to cover up the offending and egregious text.