ONTARIO PLACE CLOSED FOR SIXTH SUMMER, AS PROVINCE TRIES TO 'GET IT RIGHT' 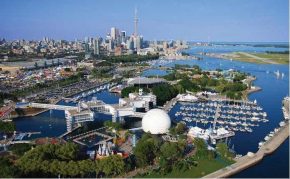 The original target back in 2012 for reopening was this past weekend for Canada 150 celebrations. Instead, the majority of the park sits as a sad reflection of the past with no improvements having been made. The exception to this is the new William G. Davis Waterfront Trail, a 1.3 kilometre path along the water’s edge to the east of the once vibrant water park and family destination.

Last summer, Tourism Minister Eleanor McMahon called the Ontario Place revitalization an enormous construction project which has to happen in phases. She asked people “to understand that the province wants to take the time to get it right, rather than rush to get something there that’s imperfect.”

But many are complaining that what’s been left at the site of the former Ontario Place is an embarrassment, especially since the site was open to the public this past weekend for a Heritage 150 festival.