GET SET FOR A WHOLE LOT OF WET

Southern Ontario is under a special weather statement advising that some areas could receive another 50 millimetres of rain by the weekend and as a result, flooding is possible because of the already saturated ground. 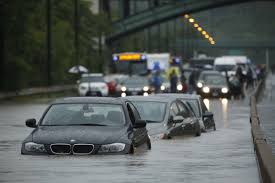 The rain is also expected to continue to raise the level of Lake Ontario which is already 60 centimetres higher than normal.  Parts of the Beach and Ashbridges Bay in Toronto’s east end are under water, the shoreline is eroding in other places and the break-wall between Ontario Place and the Humber River is now virtually useless.

Nancy Gafney, with the Toronto Region Conservation Authority, says the break-wall needs to be replaced and that is going to be costly.

The original break-wall dates back to the early 1900’s.  It was built by the federal government on provincial land.  Some estimates put the replacement cost at upwards of $100-million.