An Egyptian reporter asked her if she understands the Middle East and North Africa. Streep said she did, in part, because she’d “recently seen Timbuktu.” 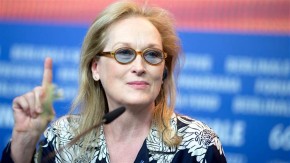 “There is a core of humanity that travels right through every culture, and after all we’re all from Africa originally,” she said. “Berliners, we’re all Africans really.”

Streep’s publicists did not respond yesterday to requests for additional comment about what she meant by all that.