Ricky Gervais has donated a signed guitar to the primate sanctuary that houses the Ikea monkey. 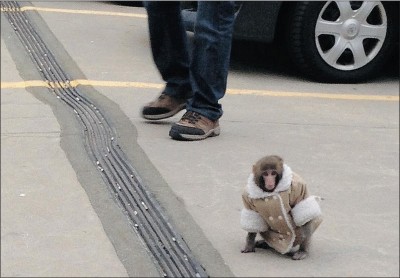 “Story Book Farm Primate Sanctuary,” northeast of Toronto, is auctioning the instrument on eBay.ca – with biddiing due to close on January 14th.

He used the guitar during filming of an upcoming comedy special here in Toronto.

The primate sanctuary in Sunderland, Ontario, says sale proceeds will help to build a new enclosure for Darwin – also known as the Ikea monkey, and his new roommates, Cody and Pugsley.

The two male rhesus macaque monkeys are due to arrive this month from a research lab.

Darwin has been at the sanctuary for three years.

A court placed him there when he was found wandering in the parking lot outside a Toronto Ikea store – wearing a little shearling coat.