PRESLEY'S PRIVATE PLANES UP FOR SALE

Two of the King’s jets are going up for auction. 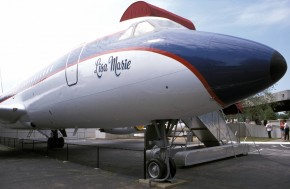 The Lisa Marie, named after his daughter, and Hound Dog II.

The Lisa Marie was bought by Presley in 1975 and renovated to include a master suite, a bathroom with gold taps, a stereo system with 50 speakers and conference room.

The tail is adorned with Presley’s trademark TCB – Taking Care of Business.

Its last flight was in 1977 to transport his former wife Priscilla Presley and actor George Hamilton to his funeral.

The Hound Dog II was also bought in 1975 as a stopgap while the Lisa Marie was being prepared.

Neither plane’s airworthy and both have been been on display at Graceland for over 30 years.

They’re being sold as one lot, with the option to buy land next to Graceland to display them, independent of the Presley Museum.