Fans of Broadway will have to wait a little longer for shows to resume until at least late May. 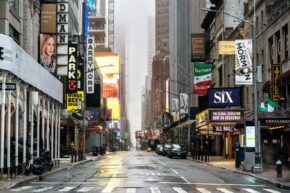 Producers are now offering refunds and exchanges for tickets purchased for shows through the end of May. And there is still no date for various performances to resume.
Theatres shut down on March 12th due to the pandemic, knocking out all shows, including 16 that were still scheduled to open. Broadway grossed $1.8B last season and attracted a record 15M people.
Producers and labour unions are discussing ways theatres can reopen safely.
The move by Broadway comes less than a month after the Metropolitan Opera said it will skip an entire season for the first time in its nearly 140-year history and intends to return from the pandemic layoff next September.
In London, West End productions of Hamilton, The Phantom of the Opera, Mary Poppins and Les Miserables won’t re-open until 2021 due to the pandemic.