Prime Minister Justin Trudeau is calling for a thorough and credible investigation of Wednesday’s plane crash that killed 63 Canadians in Tehran. 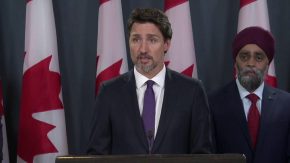 Trudeau says intelligence suggests the Ukrainian Airlines was taken down by an Iranian surface-to-air missile killing all 176 passengers. He’s also calling for international partners to be included in any investigation. He says there must be an investigation, because the families of those who died deserve closure, transparency, accountability and justice and his government will not rest until they get that. The plane crashed just after take-off from around the same time that Iran had launched more than a dozen missiles towards Iraqi air bases hosting western military troops.