Toronto Crime Stoppers will no longer hand out financial rewards for tips that lead to arrests. Instead, the organization will use those funds to invest in Toronto communities impacted by crime and violence. Toronto Crime Stoppers chair Sean Sportun says the majority of tipsters weren’t actually claiming the cash, with only 17 per cent collecting money over three years. 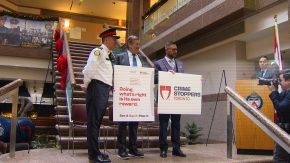 He says the program wants to appeal to people’s desire to serve the greater good. Since the program launched in 1984, nearly 166,000 tips were submitted and last year, those tips helped police make 85 arrests. The philosophy of Crime Stoppers remains the same and every tipster will still be anonymous.