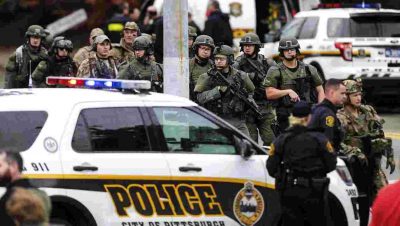 At least four people are dead after a gunman opened fire inside a Pittsburgh synagogue Saturday morning.

Authorities say it happened shortly after 10a.m. at the Tree of Life Synagogue in Squirrel Hill.

46-year-old Robert Bowers was taking into custody at the scene.

Officials say the shooting is being investigated as a hate crime.

President Donald Trump called the shooting a “devastating” tragedy and said that he wants people who are convicted of shootings like this to receive the death penalty.

“Anybody that does a thing like this to innocent people that are in temple or in church, we had so many incidences with churches, they should really suffer the ultimate price.  They should pay the ultimate price, I’ve felt that way for a long time.” said President Trump.