Tributes continue to flow in from around the world for John McCain. 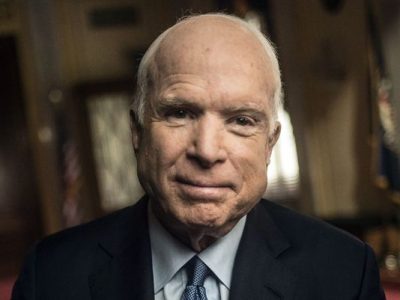 The Arizona Republican Senator, war hero and G-O-P presidential candidate died Saturday from brain cancer, just days before his 82nd birthday. In his concession speech after losing the 2008 presidential election, Senator McCain said his supporters needed to put the loss behind them for the good of the nation. The man who defeated McCain for the presidency, Barack Obama, says they shared a fidelity to American ideals. And this moment during the CNN is reporting McCain requested that both George W Bush and Barack Obama deliver eulogies at his funeral. Prime Minister Justin Trudeau called the late U-S senator an American hero and patriot who served as an inspiration for millions of people. On twitter, U-S President Donald Trump has offered his “deepest sympathies and respect” to McCain’s family. McCains’ body will lie in state ahead of a funeral service in his home state of Arizona. After that his body will be flown to Washington for services there before he’s laid to rest at the U-S Naval Academy Cemetery in Maryland.