Ontario Premier Doug Ford joked that the new stickers forced to be displayed on Ontario gas stations should have been produced by his family’s label company. That’s because the new stickers decrying the tax, aren’t sticking to the pumps that are now required by law to post. They were produced using the wrong adhesive, and many people have commented after just one try, the labels peel off easily. The stickers are part of the campaign that criticizes the federal carbon tax, imposed on Ontario by Ottawa earlier this year and indicate the amount of money the tax is expected to add to the cost of a tank of gas over the next three years. But they also don’t mention the rebates from Ottawa to offset the impact. 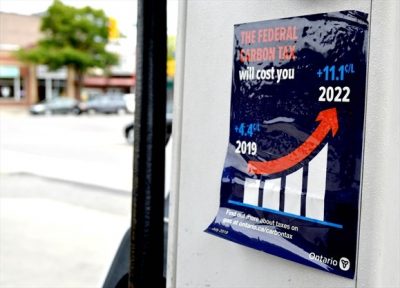 Speaking of the the pumps, if your gas tank is full, you won’t have to sit in what could be long lines at the pumps tonight. Petroleum analyst Dan McTeague expects prices to rise because the recent attack on Saudi Arabia’s largest facility means the temporary loss of about 5% of world supplies. It remains unknown how long it’ll take for the Saudis to resume normal production.