Environmentalist David Suzuki and Canada’s former ambassador to the UN Stephen Lewis are teaming up to try and push climate change to the fore in the upcoming federal election. 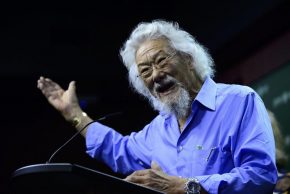 Suzuki says Canadians need to see the battle to lower our carbon emissions as if it was akin to going to war.

The two will hold a number of events across the country in a non-partisan way to get people talking about the climate crisis that could see temperatures rising around the world to levels that would cause stronger storms, rising oceans and more frequent and dangerous flooding in coastal areas.

Millions could also be displaced by the changing climate, which could cause a major migration crisis.