DID HE OR DIDN'T HE?

There are conflicting reports about job losses at SNC Lavelin tied to the remediation agreement that would have settled the bribery case against the giant Montreal Engineering company. 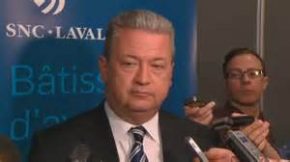 A report in the Globe and Mail says Neil Bruce never made an argument for settlement based on economic reasons like job losses.  But, Bruce told Radio Canada that because of the situation, the company’s stock is down 25% which he says could lead to a foreign take over, taking 9,000 Canadian jobs overseas…

In 2015, the RCMP charged the company, along with its international division, with corruption and fraud in relation with business dealings in Libya.

The RCMP said officials at the company attempted to bribe several public officials in the country, including dictator Moammar Gadhafi, as well as other businesses in Libya.  Police also alleged the SNC-Lavalin also lied to Libyan companies to defraud them of nearly $130 million.

If convicted, the company would be barred from bidding on federal projects for 10 years, and current federal contracts would be jeopardized.