Ontario voters have called for change and it’s Doug Ford they’ve entrusted to bring it.

“A new day has dawned in Ontario, a day of opportunity, a day of prosperity, and a day of growth. We’re going to turn this election around!” Ford exclaimed to reporters. 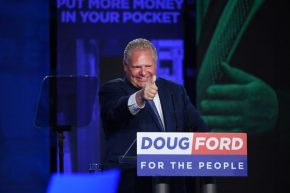 The Progressive Conservatives are ending 15 years of Liberal government at Queen’s Park, capturing 76 seats to form a majority.

Kathleen Wynne’s Liberals have lost official party status with just seven seats although Wynne won her own riding of Don Valley West, before announcing her resignation.

“I have spoken to the party president and asked him to start the process of choosing an interim leader,” said a teary Wynne to her supporters.

Another highlight from the election is a breakthrough for the Green Party. Leader Mike Schreiner won his riding of Guelph for his party’s first ever seat in the Ontario legislature.

With a slogan of For the People, Ford also rolled out several popular pledges, from cutting gas prices by 10 cents a litre to introducing buck-a-beer to reducing hydro bills.