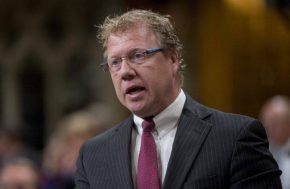 Dykstra’s resignation makes no mention of the allegations against him. Maclean’s published a report Sunday night, saying a young federal Conservative staffer filed a report with Ottawa police in 2014 complaining Dykstra sexually assaulted her. And in 2015, Dykstra faced allegations that he knowingly bought alcohol for underage girls at a St. Catherines nightclub. He denied knowing the girls were underage.

Dykstra’s resignation comes after Patrick Brown stepped down as party leader early Thursday morning amid allegations of sexual misconduct involving teenagers and when Brown was a Conservative MP in Barrie.

Dykstra’s departure also came hours after news that two key party staffers who resigned after the Brown allegations surfaced — his chief of staff and his communications director — have returned to their posts under interim leader Vic Fedeli.

Meantime, there’s news the Ontario PC Party’s internal database has been hacked. It is said to contain the names, phone numbers and other personal information of over a million eligible voters in the province, as well as party supporters, donors and campaign volunteers. It was reportedly breached before Christmas using a ransomware virus.

The PC Party has issued a statement saying no data was stolen and additional security measures were immediately implemented to prevent the same thing from happening again.