WOMEN'S MARCHES HELD ACROSS THE COUNTRY AND AROUND WORLD 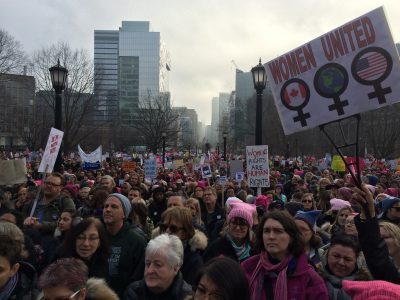 Hundreds of demonstrators packed Toronto’s Nathan Phillips Square on Saturday afternoon as rallies were held around the world, one year after similar rallies were held in protest of Donald Trump’s inauguration.

During a time when women’s rights are on the forefront with initiatives like “Me Too” and “Time’s Up”, organizers for Saturday’s march in Toronto say they feel more momentum now than they did one year ago. That’s when both women and men donned pink hats in a show of solidarity against the President whose remarks about women and boasts about sexual assault sparked outrage.

Saturday’s March was called “Defining Our Future” and was aimed at bringing different communities together in a show of solidarity against hate.

As we gather on the anniversary of a historical moment5 in time – that saw millions of people come together for the Women’s March to say no to hate and yes to justice – we must march on and help build the city and world we dream of.” Read the organizers’ Facebook page.

At least 38 communities across Canada hosted marches, rallies and protests on the one year anniversary of Donald Trump’s inauguration.