Toronto’s newborn capybara triplets still don’t have names. If you’ve got some ideas, zoo officials want to hear them. The pups were born last month at Toronto’s High Park Zoo. Their parents are the wandering capybara couple, who escaped last year and later returned. The zoo has launched a contest to name the capybabies. May 3 is the deadline for submissions. The zoo says the sex of the pups won’t be known for some time and gender-neutral names are encouraged. The parents dubbed Bonnie and Clyde became celebrities when they escaped last May and eluded zoo staff and animal detectives for weeks. 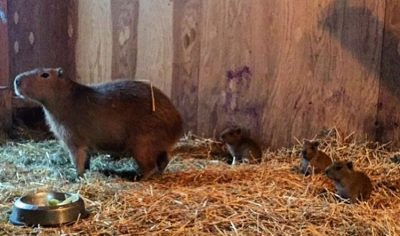