Bob Dylan was officially awarded the Nobel Prize in Literature on Saturday, but he didn’t attend the banquet in Stockholm, Sweden. The Nobel committee says Dylan did not attend the ceremony due to other commitments. The legendary singer-songwriter sent the committee a speech to be read during the ceremony. He sent officials a letter last month explaining that he could not attend due to a “pre-existing engagement,” but said he felt “very honoured indeed.” In his place, Patti Smith performed Dylan’s “A Hard Rain’s A-Gonna Fall” as a tribute to the 75-year-old. The he American rock star appeared either to forget the lyrics or was overcome with nerves and she apologised to the event guests. She paused, apologised saying she was nervous and asked the orchestra to start over. The audience comforted her with applause. According to the Nobel Foundation, his prize should be presented to him in person sometime in 2017, either in Sweden or abroad. 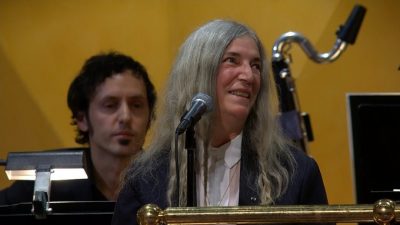 Patti Smith looks up as she apologises for forgetting the words. Credit: Nobel Media