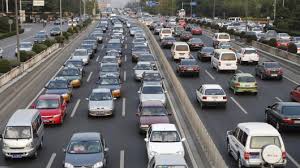 Today’s discussion: Ontario’s new licence plates. You may have seen them on the roads by now, but there is a good chance you weren’t able to make out what they show. Ontario drivers are already weighing in and criticizing the new design. one Police Officer in Kingston, Sgt. Steve Koopman, even voiced his opinion on social media asking if “anyone consult[ed] with police” on the matter before creating the plates.

Is it a problem that these plates can’t even be seen during daylight hours? Libby and Jon discuss.