A chipmunks Christmas classic’s reign atop the charts when it comes to holiday songs has come to an end. 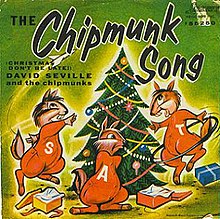 For decades, “The Chipmunk Song (Christmas Don’t Be Late)” was the undisputed chart-topping holiday song. It was number one for 4-weeks atop the Billboard Hot 100 in 1958 and 59.

It’s given up its title to Mariah Carey’s “All I Want for Christmas is You.” That song has regained popularity in recent years. It’s back on top the charts once again. It’s current reign means it’s now been #1 for five weeks total since it was released in 1994.

They’re the only two Christmas songs to ever sit atop Billboard’s hot 100.