Toronto’s mayor is offering his comments on Ontario’s new colour-coded tiered system of restrictions which go into effect across Ontario on Saturday November 7th.
The framework allows Peel and York Regions, along with Ottawa, to move into the so-called orange zone on Saturday November 7th, when rules soften in those areas to reopen restaurants, gyms and movie theatres. 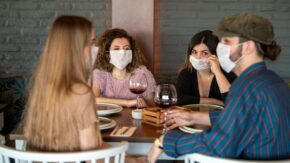 But under these new rules, restaurants and bars may allow only 50 people, with just 4 people per table and a closing time of 10pm with last call for alcohol at 9pm.
John Tory says Toronto is lagging behind by one week to enter the so-called orange zone as an added precaution.
“I’m really sorry that we’re going to take an extra week. I know the pain these businesses are going through,” Tory explained Wednesday, “But I think it would be way worse if we opened up what the medical officer believed to be too quickly and then had to close again in two weeks.”
Mayor Tory also says it’s important that everyone understands the rules before the re-openings take place on Saturday November 14th.
As Premier Doug Ford announced Tuesday, full lockdown is grey, then comes red, which is basically what the COVID-19 hotspots are in right now, then orange which allows re-openings but with conditions, yellow zones have fewer restrictions, while green zones rely on the basic public health measures around COVID-19.