TORONTO POLICE FOCUS ON PEDESTRIAN SAFETY AFTER THE TIME CHANGE

The good news is that the sun is now rising an hour earlier. But with the return to standard time, it is now darker earlier in the evenings and historically, there has been a 30 percent increase in pedestrian involved collisions after the time change. 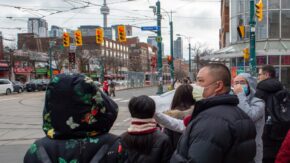 With this in mind, Toronto Police have launched a pedestrian safety campaign called “Focused on Vulnerable Road Users” which continues through Sunday November 8th.
The focus is on “the big four” driver behaviours known to cause injuries to people who walk on our roads; aggressive driving, distracted driving, impaired driving and speeding.
So far this year, 15 pedestrians have died on Toronto’s roads with two-thirds (67%) of these victims aged 55 or older.
Police are reminding motorists to give yourself extra time to get to your destination, drive within the speed limit and adjust according to conditions, expect the unexpected and use extra caution when turning in signalized intersections, and be sure your vehicle is in good working order and drive with your full lighting system on.
It’s been nearly 3 years since the Vision Zero Road Safety Plan was adopted in Toronto with the ultimate goal of working toward zero injuries and deaths on our roads.