Armenian Canadians are calling on Ottawa to do more to prevent the current conflict in Nagorno-Karabakh from turning into a genocide. 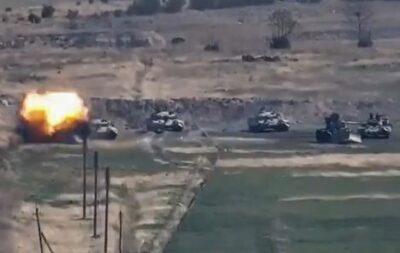 Sevag Belian, the executive director of the Armenian National Committee of Canada, says Canada needs to condemn Turkey and Azerbaijan.
Nagorno-Karabakh is majority Armenian and is controlled by the Armenian-backed Republic of Artsakh, though the territory is located within Azerbaijan.
Members of Canada’s Armenian community, half of whom live in the Montreal area, remain haunted by the 1915 genocide committed against their people by Turkey.
They fear the current conflict, which they say is fuelled in part by Turkey, will lead to another genocide and they’re urging Canada to take a stronger position supporting the Armenian people.
Armenian officials accuse Turkey of sending arms and Syrian mercenaries to help Azerbaijan.
Canada has suspended exports of a drone-targeting sensor to Turkey as it investigates allegations that drones equipped with the sensor have been use by Azeri forces.
Armenia and Azerbaijan agreed to a ceasefire in Nagorno-Karabakh starting Saturday, but immediately accused each other of violating the accord.