Fans of crime-fiction writers Agatha Christie and Raymond Chandler will be delighted to learn that a couple of their more obscure works are going to be published this week. 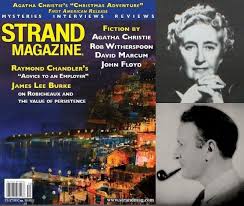 Chandler’s rarely seen “Advice to an Employer” and Christie’s “Christmas Adventure’ are being published in the new issue of Strand Magazine, the quarterly which has published obscure work by the likes of John Steinbeck, Mark Twain.
“Christmas Adventure,” also will also appear in the upcoming Christie collection “Midwinter Murder, which comes out Oct. 20.
Chandler’s works include the cynical narratives of Private Eye Philip Marlowe in novels like “The Big Sleep”.
Chandler died in 1959 at the age of 70. Christie died in 1976 at the age of 85.