Thursday October 1st is day one of new lockdown-like restrictions for residents in Montreal and Quebec City.

The two regions in Quebec, along with an area just south of the provincial capital, have been struggling with steadily rising daily case numbers of COVID-19.

Closures include restaurants, bars, movie theatres and casinos and will last for at least 28 days.

Premier Francois Legault has also cleared the way for police to quickly and remotely receive a warrant in order to enter the homes of people suspected of hosting illegal gatherings.

While Premier Doug Ford says he’s not considering similar closures in Ontario, he does admit the modelling projections for 1000 daily cases of COVID-19 by mid-October are “deeply concerning.” 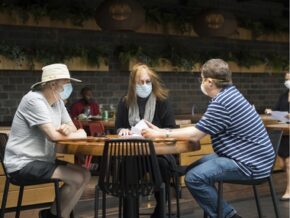 Toronto City Councillors meantime, have voted unanimously to implement further restrictions to try and curb the spread of the second wave of COVID 19.

Establishments where music or any other background sounds are played are being ordered to keep the level no higher than normal conversation in order to prevent spread of droplets.

Councillors will next consider financial relief for taxi drivers when their meeting resumes on Thursday October 1st.

According to a staff report, taxi drivers have lost 90 percent of their business during the pandemic.