The Scarborough bluffs served yet another reminder of why they’re closed to the general public on Sunday. 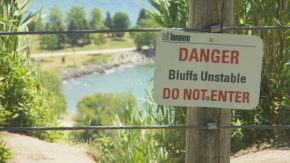 Police were called just before four o’clock yesterday afternoon near Lookout Point where the incident happened.

Nobody was injured and Toronto Fire reports a boulder caused the cascade.

There’s no indication the collapse was caused by people but several times a year, crews are called to rescue people who ignore the rules and get stuck after climbing onto them.