He began his acceptance speech with much the same message as during the campaign. 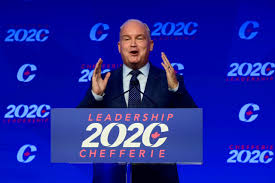 “We need a leader who puts Canadians first and will stand up for Canada and our interests in a challenging world where we’ve lost the respect of our friends and allies. The world still needs more Canada, it just needs less Justin Trudeau,” O’Toole told a virtual audience.

Erin O’Toole represents the GTA riding of Durham and is a former cabinet minister in Stephen Harper’s government.

His victory over rival Peter MacKay will be a blow to some progressives who had hoped by choosing the former longtime cabinet minister the party could finally move past some of the social conservative issues that weighed it down in the last election.

O’Toole will have to make choices on who will be in his inner circle, including campaign director, new party staffers, and aides on Parliament Hill.

Finding a place for Leslyn Lewis will also be key, as her climb from political newcomer to an impressive finish cements the power of social conservatives in the party. She placed third in the first round, ahead of Derek Sloan.