She was one of television’s first sex symbols back when TV was in its infancy, a striking presence on a show called “Super Circus” which aired from 1949 to 1955 and a master of promotion. 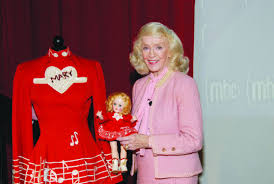 Mary Heartline, the high-energy platinum-blond entertainer who always wore a trademark majorette-style costume on the circus show, has died

“Super Circus” was a live Sunday afternoon series that began in early 1949. She conducted the band, performed comedy sketches with the clowns and delivered live commercials.

Mary Heartline died at her home in Hillsboro, Illinois. She was 92.